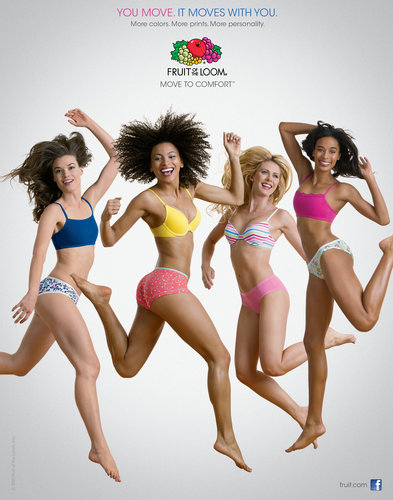 Fruit of The Loom, NY Times

NicoleDionne   |   News   |   No comment
By Stuart Elliott
MODELS that look fitter and younger than those in previous ads. Music on the soundtracks of commercials by acts like Annie Automatic, Gram Rabbit, K Flay and Mako. And the familiar brand characters who dress like fruits and leaves are nowhere to be found.

Fruit of the Loom’s new advertising campaign makes an obvious appeal to fit young people, while trying not to alienate its longtime core customers.

Can that describe a campaign for Fruit of the Loom underwear and casual clothing?

The answer is yes, as the marketing efforts for Fruit of the Loom get an ambitious makeover that begins this week. The brand known for its prosaic products and value pricing wants to behave as if it were costlier and imbued with a reputation as fashion forward.

The ads make confident promises like “More colors. More prints. More personality” and “You move. It moves with you.” To demonstrate the movement message — and bring to life a new campaign theme, “Move to comfort” — the ads will feature breakdancers, skateboarders, ballerinas, gymnasts and Jonathan Perez of the reality competition series “So You Think You Can Dance.”

The campaign includes commercials, print and online advertisements, social media like Facebook and Twitter, public relations and a revamping of the brand’s Web site, fruit.com. There are also plans for a contest called the Next Big Move, inviting consumers to perform for a chance to appear in a commercial.

The campaign, with a budget estimated at $25 million to $30 million, is being handled by the Richards Group, for assignments that include advertising and media buying; Leapfrog Interactive, for the brand Web site; and Ketchum, part of the Omnicom Group, for public relations.

Fruit of the Loom joins a lengthy list of venerable brands seeking to cultivate more contemporary images among consumers while retaining the affections of longtime customers. Others working at that tricky task include Michelin, Oreo, Perrier, Planters and Uncle Ben’s.

There is “some risk” in updating Fruit of the Loom in ways that include playing down the brand characters, known as the Fruit of the Loom Guys, said Allen P. Adamson, managing director of the New York office of Landor Associates, a corporate identity consulting group that is part of the Young & Rubicam Group unit of WPP.

“The Fruit of the Loom Guys were highly successful in building awareness of the brand name over the years,” Mr. Adamson said. “It’s hard to walk away from icons who are incredibly memorable.”Still, the characters “were not telling you why the brand was better and they were not that relevant for a brand that is in the fashion business,” he said, adding, “It was probably time to take the brand to the next level.”

Kelly Thompson, vice president for advertising and brand management at Fruit of the Loom in Bowling Green, Ky., a unit of Berkshire Hathaway, said the company “challenged the Richards Group” to find “a way for us to deliver a product message in a new way.”

Research found that ease of movement was “high on the list” of what consumers want from the kinds of apparel that Fruit of the Loom sells, Ms. Thompson said, and focusing on that attribute would be an alternate way of promoting “the comfort you get from our products.”

Also, using “real people, not actors, to do some pretty dramatic movements” would help draw attention to the campaign, she added.

As for whether the ads are too highfalutin for a brand like Fruit of the Loom that is sold in stores like Kmart, Walmart and Walgreens, “we tested them with our core consumer base to make sure they feel the campaign talks to them,” Ms. Thompson said, and the answer was yes.

The ads resonated with typical current customers, who are ages 35 to 55, she added, as well as with younger consumers, 22 to 34.

Diane Fannon, brand management principal at the Richards Group in Dallas, said that “because this idea is so different for us, we wanted to make sure we have permission to go there.”

She cited a man’s response to a commercial showing a hunky gymnast working out in Fruit of the Loom relaxed-fit boxers: “ ‘He can move that way on the rings? All I do is move from my desk to my car.’ ”

With a brand like Fruit of the Loom, which dates to 1851, “you have to constantly freshen it,” Ms. Fannon said. “We’re looking for an opportunity to convince consumers we have more to offer than they thought we had.”

“Comfort is the absence of discomfort,” she added. “What better way to show comfort than movement: It doesn’t bunch, it isn’t tight, it doesn’t ride up.”

The commercials that are part of the campaign will begin running on July 27 during the NBC coverage of the opening ceremonies of the Summer Olympics. “It’s so perfectly tied to movement,” Ms. Fannon said.

As for the Fruit of the Loom Guys, there is no intention for them to go the way of brand characters like Gillette’s Sharpie the parrot or Joe Camel. They will make some appearances as part of the public relations elements of the campaign, Ms. Thompson said.

A version of this article appeared in print on July 18, 2012, on page B3 of the New York edition with the headline: A Contemporary Spin On an Old-School Brand.